How To Grow Honeysuckle

How to Grow Honeysuckle 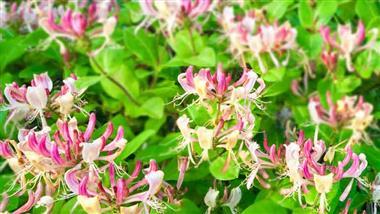 Honeysuckle (Lonicera, in the family Caprifoliaceae) is commonly found growing along roadsides or creeping up fences as ornamental plants. But these colorful and delightfully scented plants are more than just pretty decorations — they have medicinal uses as well, exhibiting powerful antiviral activity.1,2

Depending on the variety, the plants will grow as shrubs or crawling vines, and can be either deciduous or evergreen, especially those growing in warmer regions. The climbing varieties flower in the summer, while shrubby varieties flower in late winter, spring and/or summer.3

Native to temperate zones of both hemispheres, honeysuckle thrives in most U.S. states and can also be found growing in southern Asia, the Himalayas and even North Africa.4

Honeysuckle flowers, which are yellow to bright red, are known for their lovely fragrance and sweet nectar. The plants are heat-tolerant, rarely prone to pests and diseases, and known for their versatility and abundance, which makes growing and caring for them easy.5

It’s important to note, however, that climbing honeysuckle varieties can produce red berries that are loved by birds but toxic to humans. If ingested, you may experience side effects such as stomach upset, vomiting, diarrhea and nausea.6,7

Mexican honeysuckle (Justicia spicigera), also known as desert honeysuckle, is not a real honeysuckle10 but rather a relative of the shrimp plant, another bloom popular in Central Texas.11 While both shrubs and climbing varieties are easy to cultivate, they have different requirements in terms of soil, pruning and training:12

• Climbing varieties such as L. henryi, Halliana, Graham Thomas and L. sempervirens require fertile, well-drained soil rich in humus. Full sun will encourage greater profusion of flowers, but aphid attacks are discouraged if grown in partial shade. So, you may want to weigh out the pros and cons before planting.

Japanese honeysuckle does not require regular pruning, but you may want to control growth by cutting back shoots in spring and thinning out congested growth.

Common honeysuckle (Lonicera periclymenum) should be pruned back one-third in late summer, once it has flowered. All climbing varieties can be renovated by hard pruning to about 2 feet from the ground in early spring. Also remember that climbers need support, especially when they’re young, so secure them with galvanized wire to a fence or trellis.

• Shrubby varieties such as Baggesen’s Gold, L. pileata, L. fragrantissima and Winter Beauty will thrive in just about any soil type, provided it drains well, and can be planted in either full sun or partial shade.

Deciduous shrubs, such as Lonicera tatarica, should be pruned in late spring or summer, after flowering. To stimulate growth, remove old, weak stems and cut back one-third of the older branches. Make the cuts next to a new, upright shoot.

Evergreen shrubs such as Lonicera nitida or “Baggesen’s Gold,” which makes a nice hedge, should be pruned three times between spring and fall. Both types can be renovated in early spring by hard pruning.

Regardless of the type, adding organic compost and mulch around the base will reduce water stress, discourage powdery mildew and help the plant thrive. To encourage flowering, add a top dressing such as fish blood and bone in the spring.

Honeysuckle can be propagated either by seed, layering, softwood, hardwood or leaf bud cuttings:

• Seed — Seeds can be sown in a cold frame in the fall. An alternative is to refrigerate the seeds with a small amount of moist compost for four to 12 weeks, then germinate the seeds at a temperature of 55 to 64 degrees Fahrenheit (13 to 18 degrees Celsius).

• Softwood cuttings13 — Cut a 2- to 3-inch (5- to 7.5-centimeter) long piece from the mother plant in late spring or summer. Pinch leaves off the lower half of the cutting and remove any flowers. Make a cut just below a leaf node and dip the base in a root-promoter before planting.

• Hardwood cuttings — Evergreen shrubs can be propagated by taking an 8- to 12-inch (20- to 30-cm) hardwood cutting between fall and midwinter.

• Layering14 — Layering is commonly used to propagate honeysuckle vines. In early spring, when shoots are flexible and dormant, simply bend a 1-year-old stem to the ground and pin the shoot 6 to 9 inches from the tip, forming a U. Cover the base of the U with soil, making sure the tip is still above ground.

• Leaf bud cuttings15 — Another simple way to propagate honeysuckle vine is to cut a small section, making the first cut just above a pair of leaves and the second cut halfway between two leaf joints. Growth regulator can be used to promote roots but is not required.

Place the cutting, leaf end up, in a small pot. Keep the soil moist but well-drained in a warm, sunny area. Placing a clear plastic bag over the pot to create a mini hot-house will encourage heat and moisture retention. Once the risk for frost has passed, allow the plant to acclimate to the outdoors, then plant it in the ground.

How to Dry and Store Honeysuckle

The honeysuckle blossoms can be used for tea either fresh or dry. To dry them:16

Once dried, store the flowers in an opaque, airtight container kept in a cool, dry place. Keep them out of direct light to avoid damaging the chemical compounds and essential oils. Honeysuckle tea is the easiest way to take advantage of the medicinal qualities of this fragrant plant. Simply add a handful of fresh or dried honeysuckle flowers to 4 cups of hot water. Steep for a few minutes, then drain to remove the flowers.

Honeysuckle Is a Powerful Antiviral Remedy

Honeysuckle is used in Traditional Chinese medicine (TCM),17 where it’s known as Jin Yin Hua. Raw honeysuckle, honeysuckle tea and honeysuckle oil are all known for their medicinal benefits. In TCM, the honeysuckle flower is commonly used to help ease the flu, colds and sore throat.

Research18 shows it has the ability to prevent the influenza virus from replicating. The study,19published in the journal Cell Research, found a plant microRNA called MIR2911 in honeysuckle effectively suppressed both swine flu and bird flu viruses. Importantly, the antiviral properties of MIR2911 remain after boiling, suggesting honeysuckle tea may offer effective antiviral benefits. According to the authors:20

“We suggest that as the first natural product to directly target influenza A viruses, MIR2911 is the ‘virological penicillin’ that serves as a novel therapeutic and preventive agent against not only influenza A, but potentially also other types of viruses.”

Xiao Er Ke Chuan Ling Oral Liquid (KCL), an herbal preparation that uses honeysuckle and nine other plants, has antiviral, antibacterial and potent pharmacological actions and has been shown to help treat acute bronchitis in children.21

Honeysuckle has also been shown to have wound-healing properties.22 Aside from showing antimicrobial activity against Escherichia coli, Staphylococcus epidermidis, Staphylococcus aureus, Candida albicans and Candida tropicalis, an ointment prepared with honeysuckle extract “exhibited potent wound healing capacity as evidenced by the wound contraction in the excision wound model.”

Disclaimer: The entire contents of this website are based upon the opinions of Dr. Mercola, unless otherwise noted. Individual articles are based upon the opinions of the respective author, who retains copyright as marked. The information on this website is not intended to replace a one-on-one relationship with a qualified health care professional and is not intended as medical advice. It is intended as a sharing of knowledge and information from the research and experience of Dr. Mercola and his community. Dr. Mercola encourages you to make your own health care decisions based upon your research and in partnership with a qualified health care professional. If you are pregnant, nursing, taking medication, or have a medical condition, consult your health care professional before using products based on this content.
previous article next article